The Ford Motor Company Highland Park Plant was built between 1909 and 1920 on a 60-acre site bounded by Woodward, Manchester and Oakland Avenues, and the adjacent railroad lines. At this plant Ford introduced the automotive industry’s first moving assembly line in 1913 and the $5 day in 1914, more than doubling wages overnight, while cutting the work day from 9 to 8 hours. Detroit architect Albert Kahn designed the complex, which included offices, factories, a power plant and a foundry. By 1915 Ford built a million Model T’s at the facility and in 1925 over 9,000 were assembled here in a single day.

In 1927 Ford shifted automobile production to the River Rouge Complex, with the introduction of the Model A, limiting this plant to truck and tractor manufacturing. Ford Motor Company sold the facility in the 1980’s. Today this National Historic Landmark is owned by Woodward – Manchester Properties and operated by our host, General Manager and HFHA member, Claude Auger. 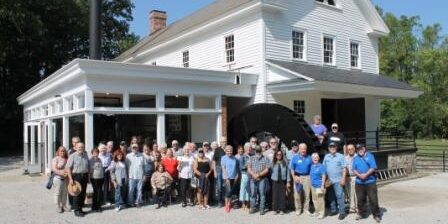